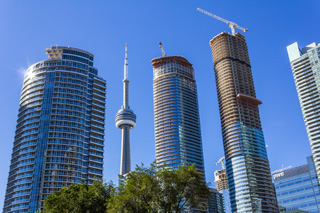 A report issued yesterday by market analysis experts Urbanation shows a continued decline in Greater Toronto Area (GTA) new development launches and sales, occurring at the same time that construction in the region reaches record highs. During the first quarter of 2019, pre-sale launch activity fell to a 10-year low, price growth slowed, but the number of projects under construction has hit an all-time high.

The effects of a 2017 spike in new openings (32,077 units) are still being felt in the region. Many of these projects are now entering construction or are well into it, bringing the total number of units being built in Q1 2019 up to a record 71,378 units across 242 projects, a substantial increase from the 61,555 units across 221 projects under construction during the same period last year. This sustained pressure on the construction industry has led to rising building costs, which has resulted in several notable cancellations and a more conservative approach taken by developers launching new projects.

While condominium prices are still on the rise, increases are much less substantial than the period from 2016 to 2018 where pre-sale prices skyrocketed by over 50%. Levels are now moderating, with average prices for actively marketed projects in the first quarter rising 1.7% year-over-year, now sitting at $779 per square foot. In contrast, the 2017-2018 period saw average quarter-over-quarter increases of 2.9%. These figures cover the GTA region, though the Downtown Toronto sub-market remained hot. Low inventory in it has pushed asking prices for available units on the market up by 13% from last year, reaching a new record average of $1,279 per square foot.